This webpage provides sixty one photographs taken at a German concentration camp, Flossenbürg, shortly after it was liberated by the 97th Division of the U.S. 3rd Army. The photographers, all members of the U.S. Signal Corps, were: PFC Howard E. James (photos of 30 April, 1 May); Private Vetrone and Sgt. Fred Poinsett (4 May); and Cpl. Edward Belfer (17 May).

The collection that is reproduced here was donated to the Holocaust Memorial Program at Oregon State University during the spring of 1996, by Laura Morse. The generosity of Mrs. Morse cannot be overestimated. Twenty of the photos were publicly exhibited on campus in May 1997, during OSU's annual observance of Holocaust Memorial Week. It appears that otherwise the collection has not been available to the public.

The value of the collection is enhanced by the caption that appears on the back of each photo. Although much of the text is repeated in several captions, among them the captions provide much information on Flossenbürg, incorporating both the testimony of survivors and the records that were seized at the time of liberation.

In part, the story of Flossenbürg, especially in its last months of operation and its first weeks after being liberated, is told in the captions and photographs on this site. The notes that follow are intended primarily to complement these sources. 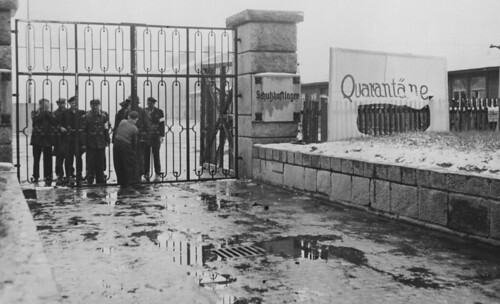